There’s probably a lot more information on a tire’s sidewall than you’re aware of, such as where the tire was made and when, and sometimes even whether your tire complies with pass-by noise regulations in Europe.

What is in this article?

Here’s how to decode it all:

1.) “245”: The numbers preceding the slash indicate the distance, in millimeters, across the widest point of the tire—called section width (245mm, or 9.65 inches, in this case)—when mounted on a wheel of specified width. Often listed before this number are letters that loosely signify the kind of duty for which the tire was designed: “P” stands for “p-metric” and is generally used on passenger cars, “LT” indicates light-truck duty, and “T” is for a temporary spare.

2.) “40”: This two-digit number is the aspect ratio, or profile, of the sidewall. This tire’s sidewall height is 40 percent of the tire’s width, which equates to 98mm, or 3.86 inches. The lower the number, the shorter the sidewall. An exception is Michelin PAX tires, where this number signifies the overall diameter of the tire in millimeters.

3.) “R”: This letter indicates radial tire construction; nearly all tires sold today are of this variety. Other constructions are “D” for bias-ply tires and “B” for belted. A preceding “Z” is simply a reference to an outdated and vague speed rating of more than 240 km/h, or 149 mph (the specific rating can be found in the service description). 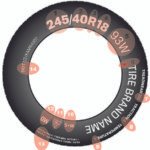 4.) “18”: This number indicates the diameter of the wheel on which the tire should be mounted, generally in inches. These are usually whole numbers but can also be half-inch increments, such as “16.5,” or in millimeters, as in “390.”

5.) SERVICE DESCRIPTION: These numbers and letter together are called the service description. The numbers indicate the tire’s maximum “load” rating, or the amount of weight the tire can bear (“93” stands for 650 kilograms, or 1433 pounds), and the letter denotes the speed rating, or how fast the tires can safely rotate (“W” means 270 km/h, or 168 mph). The lowest rating typically found on passenger-car tires is “Q,” which means 99 mph. The highest, “Y,” is good for 186 mph, and when enclosed in parenthesis, as in “(93Y),” it means “in excess of” 186 mph. These values are determined by tire-testing machines in a lab, and the decoded load rating is also listed elsewhere on the tire.

6.) RED DOT: Here’s a long-held myth that can be put to rest: It doesn’t help in the balancing process to align the “heavy spot” of a tire—often indicated with a red dot—with a wheel’s valve stem when mounting. Aluminum wheels are now the norm, and the valve stem is no longer the de facto lightest point.

7.) “200”: The tread-wear grade is a relative figure based on the rate of wear of a tire during a 7200-mile on-vehicle test compared with that of a reference tire. The higher the number, the longer it will likely last. “300” indicates that the tire should last three times longer than the Uniroyal reference tire, which scores 100.

8.) “A”: A tire gets a seemingly uninformative traction grade (“AA,” “A,” “B,” or “C”) based on how much grip it generates in a straight-line test in which the tire is dragged at 40 mph across a wet surface without being allowed to rotate at all.

10.) “M+S”: This stands for “mud and snow” and simply means that the tire has more space between the treads, which should help to facilitate traction on soft surfaces.

11.) “MOUNTAIN SNOWFLAKE”: Unlike the M+S rating, this icon indicates that a tire has met a minimum performance requirement in snow testing.

12.) ORIGINAL EQUIPMENT (OE) MARKING: These letters—or a symbol—indicate that this is the automaker-specified version of a tire that came as a car’s original equipment. These tires can often be a very different blend of rubber compound compared with the off-the-shelf variety of the same tire, even though the tread pattern is identical. Examples of OE markings: General Motors—all have a TPC SPEC number; BMW—most have a five-pointed-star symbol; Mercedes—some are emblazoned with “M0”; Porsche—all have the letter “N” followed by a number, i.e., N1, N2, etc.

13.) TIRE CONSTRUCTION MATERIALS: This is a required and self-explanatory list of the reinforcing materials and number of layers (in both the tread and the sidewall) that are molded into a tire’s rubber for reinforcement.


14.) DOT LABEL: Every tire sold in the U.S. must have U.S. Department of Transportation (DOT) labeling. The first two characters indicate the factory of manufacture, and the next five or six are manufacturer-specific jargon (for tracking purposes, as in the case of a recall). The last four numbers give the date of production (the first two indicate which of 52 weeks, and the second two, the year). The European equivalent of the DOT code may also be present (it starts with an “e”), although fewer manufacturers are printing both on a tire’s sidewall (to prevent gray-market shipments when currency exchange rates fluctuate). If this string of numbers ends with “-S,” it means the tire complies with European noise regulations.

1 thought on “How To: Read a Tire Sidewall”