Whenever you work with power tools or on electrical circuits there is a risk of electrical hazards, especially electrical shock. Anyone can be exposed to these hazards at home or at work. Workers are exposed to more hazards because job sites can be cluttered with tools and materials, fast-paced, and open to the weather. Risk is also higher at work because many jobs involve electric power tools. Electrical trades workers must pay special attention to electrical hazards because they work on electrical circuits. Coming in contact with an electrical voltage can cause current to flow through the body, resulting in electrical shock and burns. Serious injury or even death may occur. As a source of energy, electricity is used without much thought about the hazards it can cause. Because electricity is a familiar part of our lives, it often is not treated with enough caution. As a result, an average of one worker is electrocuted on the job every day of every year! Electrocution is the third leading cause of workrelated deaths among 16- and 17-year-olds, after motor vehicle deaths and workplace homicide. Electrocution is the cause of 12% of all workplace deaths among young workers.

This manual will present many topics. There are four main types of electrical injuries: electrocution (death due to electrical shock), electrical shock, burns, and falls. The dangers of electricity, electrical shock, and the resulting injuries will be discussed. The various electrical hazards will be described. You will learn about the Safety Model, an important tool for recognizing, evaluating, and controlling hazards. Important definitions and notes are shown in the margins.Practices that will help keep you safe and free of injury are emphasized. To give you an idea of the hazards caused by electricity, case studies about real-life deaths will be described.

The severity of injury from electrical shock depends on the amount of electrical current and the length of time the current passes through the body. For example, 1/10 of an ampere (amp) of electricity going through the body for just 2 seconds is enough to cause death. The amount of internal current a person can withstand and still be able to control the muscles of the arm and hand can be less than 10 milliamperes (milliamps or mA). Currents above 10 mA can paralyze or “freeze” muscles. When this “freezing” happens, a person is no longer able to release a tool, wire, or other object. In fact, the electrified object may be held even more tightly, resulting in longer exposure to the shocking current. For this reason, handheld tools that give a shock can be very dangerous. If you can’t let go of the tool, current continues through your body for a longer
time, which can lead to respiratory paralysis (the muscles that control breathing cannot move). You stop breathing for a period of time. People have stopped breathing when shocked with currents from voltages as low as 49 volts. Usually, it takes about 30 mA of current to cause respiratory paralysis. Currents greater than 75 mA cause ventricular fibrillation (very rapid, ineffective heartbeat). This condition will cause death within a few minutes unless a special device called a defibrillator is used to save the victim. Heart paralysis occurs at 4 amps, which means the heart does not pump at all. Tissue is burned with currents greater than 5 amps 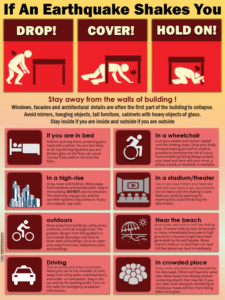 Photo of the day: If An Earthquake Shakes You-Infographic free